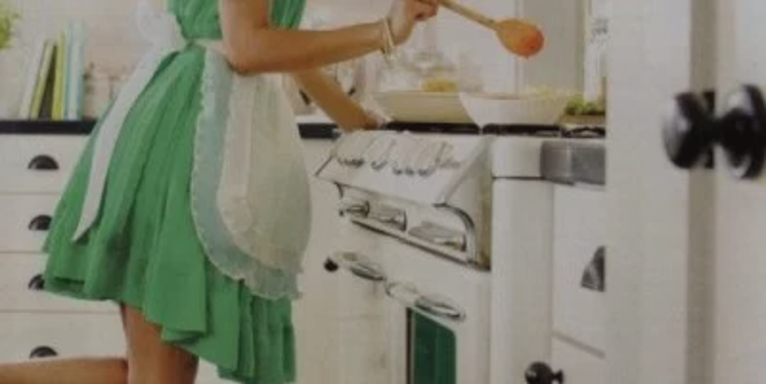 Historians in the UK have noted a recent trend (difficult to confirm) of women reassessing the feminist fulfillment narrative, and deciding that cozy domesticity is actually rather lovely. The Daily Mail reported the story, tagging in at the end the inevitable ‘men are lazy, lying assholes and women do all the work anyways’ addendum, which is of course thoroughly unsurprising.

A study carried out by market research firm ComRes recently suggested that women do twice as many roles around the home as men.

However, it was suggested that the divide in labour was probably even greater as men tended to over exaggerate their contribution to household chores.

The DM doesn’t reference any source for this claim, but I suspect it’s a study I obliterated in a previous post, which you can read here. The tl;dr is that housework studies tend to deliberately exclude all the traditional housework done by men. Picking up toys indoors counts as work, picking up toys outdoors (like bikes and skateboards) doesn’t. Guess which activity men are more likely to do? In actual fact, women do one extra hour of work than men in any given week when both paid and unpaid labor is accounted for, but feminists never let anything as trivial as facts in the way of their victimhood culture.

Yvonne Roberts has a nice whine over the housewife trend in the Guardian, sniffing that only rich bitches get to choose the luxury of staying home and they don’t even do the work, anyways, the lying whores.

Arguably, many of today’s domestic queens initially have left their careers involuntarily because of the intransigence of the workplace. Once they are signed up to pilates and sushi courses, all enjoyed outside the four walls of home, with the help of an underpaid au pair and female cleaner, then they can’t sing the praises of family life highly enough.

Ooh, somebody sounds jealous! No doubt, there are lots of rich housewives outsourcing domestic labor and leading lives of luxury (Hi Sophie Trudeau!), but there are just as many rich wives raising their own children without the assistance of paid help (Hello Melania Trump!). The rich are not the place to look. These new housewives aren’t pampered rich women. I suspect they’re actually overwhelmingly poor. They’re newcomers to the UK. They’re Muslims.

5.4% of the population in Britain is Muslim, but almost 10% of all children under the age of 5 are Muslim. That doesn’t frighten feminists as much as rich ladies in frilly aprons, but it damn well fucking should!  The PEW council desperately hopes the birthrate will slow to stave off the Islamification of Europe, but that’s wishful thinking. PEW’s numbers are projections for one thing, and they do not account for birth differences between political Islam and merely religious Islam, nor do they account for the huge numbers of radicals attempting to reach the UK.

The white birth rate remains disastrously low across Europe because women still think working in a cubicle doing some useless bullshit job is better than being at home with four children. Women tend to discover they’ve fucked themselves good and hard only when they get between the rock and the hard place, or once they’ve hit old age. White women, of course. Muslim women are not quite that stupid. Feminists seem to think that once Muslim women are exposed to the joys of feminism (cat piss, being overweight, STDs), they will throw off the mantle of housewife and join the whining, childless slut brigade. Muslim women won’t.

For most Western women, choosing the housewife role is based on more or less pure, unadulterated selfishness: being at home, with or without children, makes women happy. Now, it also happens to lead to an earning premium for men, produce happy, healthy, productive citizens and create stable communities, but I sincerely doubt that’s why women choose it: women simply aren’t that high-minded. Muslim women, however, are motivated by more than just selfishness – they have a faith based reason to be at home. The more radical they are in their beliefs, the more likely they are to be at home. And I suspect, the more children they have.

So on the one hand, I don’t think Western feminists have anything to worry about: Western women are still eating the dog shit feminists sugar coat for them. On the other hand, feminist idiocy about Islam means feminists are that much closer to getting slammed forcefully into the kitchen, along with all the rest of us, too. And no one wants that future.

And feminism is cancer.

← Does Feminism Empower Women?
What Feminism gets wrong about Intersectionality →